Things to see in Marrakech

Marrakech is one of the fascinating imperial cities in Morocco. Its perfumes, colors, and melodies remind us of a tale from a thousand and one nights. The souks, the squares full of artisans, the song of the Muezzins who invite the faithful to pray, and the mysterious riads attract many visitors every year. The part of the city that attracts the most for its magnetic charm is the Medina, the old city dating back to the 11th century. With this guide, we will discover the ten most important things to see in Marrakech. The sites of cultural interest are quite limited. However, what is really worth seeing in this magnificent city is the warm and familiar atmosphere that reigns in its streets. Despite being relatively small, the old part of the city boasts several traditional Berber markets, the souks, on whose stalls are placed traditional Moroccan and Berber products: carpets, lanterns, spices, jewels and who knows … maybe even some magic lamps!

Things to see in Marrakech 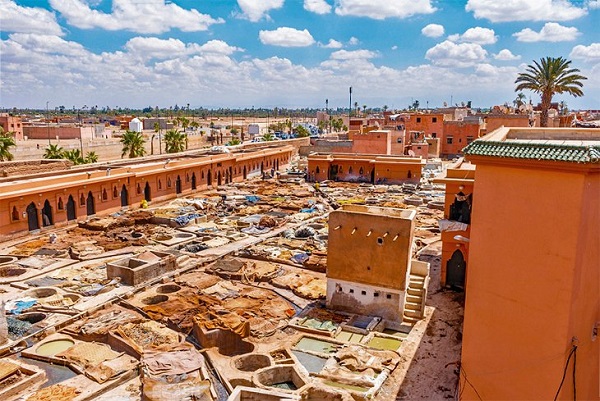 Jemaa el Fna is the beating heart of Marrakech, a huge square packed with artists, street vendors and tourists. It has been a UNESCO World Heritage Site since 2001. At any time of day or night, you can observe the comings and goings of people strolling through the square and, in the meantime, observe the color of the African sky that changes nuance depending on the time and season. The sunsets admired by the cafes in the square are certainly an unforgettable experience that you will live in Marrakech. Among its stalls, you can buy fabrics, eat dried fruit and dates, have your hands decorated with henna, or simply watch the fortune tellers and listen to the voice of storytellers who tell Arab tales to the public. This square is clearly affected by the French influence it suffered during colonial rule. It is no coincidence that it is also known as “la place.” The Medina develops around it and constitutes a real stage for a vital show that animates the city. Around the square unrolls a real ball of streets, populated by thousands of street vendors: the souks, or markets, are the soul of the city. Among these winding streets, you can breathe the real Moroccan atmosphere.

The desert and Essaouira

Another unforgettable experience is desert excursions on camels or horses, known as “desert tours.” Moving away from the chaotic city life, you will enter another dimension where silence and solitude are the masters. You will be mesmerized by the beauty of observing the endless expanses of sand and the immense blue sky as you slide on the sand, lulled by the swaying motion of your camel. It is also possible to spend a night in a tent in a typical Berber camp: drinking mint tea or coffee under the starry sky of the Sahara will almost seem like a dream. If we talk about trips out of town, a visit to Essaouira is a must, considered the complementary city of Marrakech.

The tombs of the Saadis

The Sa’aditi necropolis, not far from the Kasbah mosque, is one of the most amazing works of art in the whole of North Africa. Dating back to the end of the sixteenth century, the tombs were rediscovered by archaeologists only at the beginning of the twentieth century. Finely (and richly) decorated, the rooms of the necropolis are a marvel that you cannot miss in Marrakech. The centerpiece of the building is considered the hall of the twelve columns, a mausoleum decorated with stucco and marble, which, as in the other sacred buildings, are, in fact, the cause of the hypnotic beauty that enchants visitors, keeping their gaze chained to the complicated geometric design that covers walls and floors.

The Majorelle Gardens are a complex of botanical gardens northwest of the Medina. Originally constituting a palm grove, the “Jardin Majorelle” was designed and built at the beginning of the twentieth century by Jacques Majorelle, who drew inspiration from traditional Moroccan gardens. These gardens constitute a real luxuriant oasis in the heart of the city, full of lush exotic plants populated by rare birds that nest among its foliage and decorated with fountains and ponds. Famous is the color with which the walls of the garden villa were painted: an intense cobalt blue that conveys a sense of profound tranquility to the entire garden.

The importance of cleanliness in Muslim culture is testified to in Marrakech by the presence of numerous hammams. The tourist aspect of this type of place has often prevailed, giving life to the hammam spa and real wellness centers. For those who are more interested in the traditional aspect, there are still public hammams, where washing is done on the ground with a rough glove and black soap. These public places are strictly divided by gender. If you decide to try the experience of a public hammam, it is advisable to bring a towel and spare clothes.

Ali Ben Yousef Medersa and the Museum of Marrakech

Unfortunately, Muslim sacred buildings, such as mosques and Koranic schools, cannot be visited. The only exception is Ali ben Yousef’s Medersa, a 14th-century Koranic school that closed permanently in the 1960s. The building is in full Moorish style and is entirely decorated with stucco and marble that reproduce the natural zoomorphic figures with geometric patterns. While respecting the place, it is possible to admire the building that housed the largest Medersa school in the Maghreb. In the center of the building, there is a splendid courtyard in which the rectangular basin for ablutions is located. The entire palace, finely decorated, is a work of art, but the wooden dome decorated with geometric motifs in the prayer room deserves particular attention.